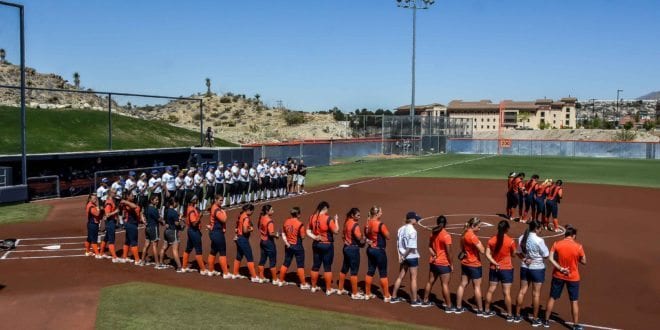 The UTEP softball team will continue Conference USA action as it hosts WKU April 8-9 at the Helen of Troy Softball Complex.

The Miners and Hilltoppers will compete for the first time ever in a doubleheader starting at 3 p.m. on Saturday. Sunday�s contest has been changed to a noon start.

Tickets are $3 for kids and $5 for adults, while �Bark in the Park� is the weekend theme.

UTEP will play all league games from here on out, which includes trips to LA Tech (April 14-15) and UAB (April 29-30). The Miners will end the regular season hosting Florida Atlantic (May 6-7).

The C-USA Tournament will be held in Hattiesburg (Southern Miss) May 10-13 as the top eight programs will advance to the postseason to play for an automatic bid to the 2017 NCAA Tournament.

UTEP took a three-day road to San Antonio April 1-3 to play at league foe UTSA, while playing its final nonconference contests at Incarnate Word. The Miners forged a 2-3 record during the weekend in East Texas, which included an epic game two, 7-6, victory in 10 innings at UTSA and a run-rule, 11-3 (5), win in game two against UIW.

Against the Roadrunners in game two, the Miners were down 3-0 after four innings before Cortney Smith connected on her seventh home run in the fifth frame � a solo shot over right center. UTEP took a 4-3 lead it the sixth as Smith tallied her second RBI of the contest on a single to left and Kiki Pepi connected on a two-run single to right.

The Roadrunners tied the score in the bottom half and the two teams traded runs in the innings eight and nine before Pepi came up with a solo blast down the left line for the go-ahead lead in the 10th. Sargent gave the Miners a 5-4 lead in the eighth, while Clayton homered in the ninth for a 6-5 advantage. Kaitlin Fifield threw all 10.0 frames (career high) to earn her first win of the season. UTEP fell in game one, 8-1, while UTSA rallied from 5-3 down to win 8-5 during Sunday�s series finale.

At Incarnate Word, UTEP rebounded from a 5-2 loss in game one to storm back with a 11-3 victory in 5.0 innings. Kaitlin Ryder blasted a career-high two dingers on a 3-for-4 performance with four RBI. Taylor Grohmann won her first game of 2017, throwing a complete game with no earned runs.

The two programs will meet for the first time ever on Saturday.

The Hilltoppers are currently at an even 20-20 record, while tallying a 4-8 conference record. WKU started off its conference run with sweeping Middle Tennessee but falling short to FAU, Marshall and UAB. WKU leads Conference USA with 32 home runs, but is hitting a .203 as a team to rank last in C-USA.

The Hilltoppers lead the conference in hit by pitch (60) and leads the way by striking out 237 times to leads the league. WKU has scored 144 runs, ranking tied ninth in C-USA. Jordan Mauch is shining through in the lineup with a .289 average, 18 RBI and a team-best 10 home runs.

Brittany Vaughn (.271) leads the team with 24 RBI, while ranking second with six dingers. Kara Brewer (.226) leads the team with nine stolen bases. Adriana Gray (.176) has hit five home runs with 18 RBI. On the defensive side of the game, the Hilltopper pitchers are recording a 3.15 ERA as a staff, ranking in the middle of the pack in conference. Kathryn Downing (11-7) has won the most games and has kept her ERA down to a staff-leading 2.09 and striking out 75 batters.

UTEP played in an epic 10-inning contest in game two at UTSA � in which the Miners won 7-6 over the Roadrunners. It was the longest game since playing 11 frames at Florida Atlantic on April 19, 2014. The April 1 contest at UTSA is tied for fourth longest in UTEP history. The most innings played was a 13-inning battle on May 7, 2009 against East Carolina at the Conference USA Tournament in El Paso with UTEP coming out on top 4-3.

UTEP RANKINGS IN C-USA ONLY GAMES

UTEP has five players ranked in the top 25 in Conference USA in batting. Kaitlin Ryder (.365) ranks 13th,Cortney Smith (.354) ranks 14th, Kiki Pepi (.349) and Courtney Clayton (.346) ranks no. 17 and 18, andTaylor Sargent (.316) ranks 24th. UTEP has the most players in the top 25, while UTSA has four players. Charlotte, FIU, Marshall and North Texas each have three, and Florida Atlantic and Middle Tennessee has two each.

The information herein on "UTEP Softball To Host WKU As Two Programs Meet For First Time" is not intended to replace a one-on-one relationship with a qualified health care professional, or licensed physician, and is not medical advice. We encourage you to make your own healthcare decisions based on your research and partnership with a qualified healthcare professional.