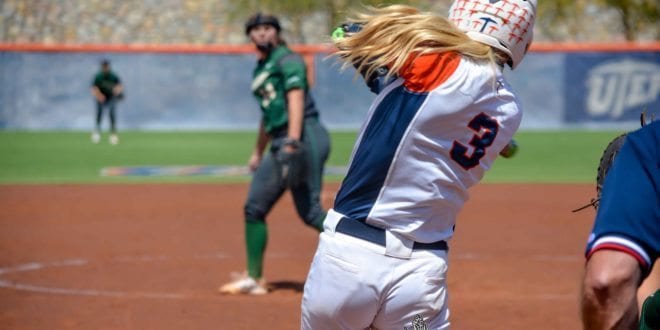 SAN ANTONIO, Texas � In a wild game two contest, Courtney Clayton and Cortney Smith each slammed solo home runs and Kiki Pepi gave UTEP the go-ahead lead in the 10th on a solo shot, lifting the Miners to a 7-6 victory after trailing 3-0 early in the game on Saturday afternoon at Roadrunner Softball Field.

�It was a battle all day and it�s one of those where after the first game we could�ve just laid down and chalked up a bad day,� fourth-year head coach Tobin Echo-Hawk said. �The kids were just resilient; kept fighting and kept coming back with their backs against the wall. That is all I ask of them and they did a great job today.�

�Sometimes life doesn�t care what happens to you,� Echo-Hawk said. �It�s all about how you respond because no one will ever feel sorry for you. You just need to keep fighting because it�s easy to quit and make yourselves victims. Short-term memory also comes into play. A few of our girls were having bad games and then came up with big hits.�

UTEP racked up 26 total hits in the two games, including a season-high 17 hits in the second contest � tied most during the Echo-Hawk. Clayton went 3-for-5 as it was her 12th multi-hit game of the season and no. 54 of her career, while Pepi (3-for-4) and Taylor Sargent (3-for-6) tied their career highs in hits.

Kaitlin Fifield won her first game of the season, as she threw a career-high 10.0 innings. Fifield now has 23 wins in her career, ranking behind Kelly Curan (24) and Danielle Pearson (25) on the program�s all-time list.

The series finale is Sunday, starting at 1 p.m. CT/Noon MT.

UTEP 7, UTSA 6 [10]
The Roadrunners took an early lead, scoring three runs in the second inning. But instead of rolling over, the relentless Miners fought back.

Smith started the comeback when she connected on her seventh home run of 2017, a solo shot over right center on a 2-1 count to get within two runs (3-1). It was Smith�s first home run since March 4 at Texas Tech. Smith finished the contest 2-for-5 with a pair of RBI and two runs.

UTEP then took a 4-3 lead in the sixth on five hits. With one out, Ariel Blair used one of her two hits to single to left. Clayton and Kaitlin Ryder singled to center on back-to-back at bats to load the bases for Smith. The sophomore singled in Blair to bring the Miners within a run. Pepi, who tallied three RBI in game two, singled to right center, plating Clayton and Ryder to give her squad a 4-3 lead.

In the bottom sixth, UTSA tied the contest 4-4 after Kaley Pyles knocked in Bailee Baldwin, who led off with a single to right. Pyles, though, was thrown out at second base for the second out. Taylor Oberg doubled, but Fifield forced Angelica Nino to ground out to Smith to end the inning.

After a scoreless seventh, the runs started the cross the dish during the nail-biting last three frames.

Smith reached first after being hit by a pitch to lead off the inning. Pepi advanced her teammate to second on a sac-bunt and then Sargent doubled down the left field line, plating Smith for a 5-4 advantage.

But the Roadrunners would answer in the bottom eighth. Baldwin doubled to right field off the fence with one out and Hailey Garza singled down the left line, advancing pinch runner Erica Sanchez to third. Pyles, as she did in the sixth, came up with another big hit that scored Sanchez to tie the contest 5-5.

In the ninth with two quick outs, Clayton launched a towering solo shot over left on a 1-2 pitch to give the Miners a 6-5 edge. It was her first dinger since March 11 at North Texas.

But the contest would not end there as UTSA tied the score in the bottom ninth. Lindsey Stewart led off the home half with a single up the middle, while proceeding to steal second base. Celeste Loughman reached on a bunt single and also followed by snagging a base to put runners at second and third with no outs. Rylee Rodriguez grounded out to Smith, but Randee Crawford tied the contest with a sac-fly hit to center in which Stewart scored. Fifield then forced Sanchez to pop out the second base as Clayton made an over-the-shoulder catch to halt the game-winning run from scoring.

The 10th inning drama was set up for Pepi, who had not homered since March 1 at NM State. Pepi saw seven pitches and finally connected on the eighth pitch, a liner over left on a 3-2 count that put the Miners ahead for good.

Fifield used only five pitches in the bottom 10th as the final three batters went down in order to conclude the epic contest. Fifield helped her cause on the defensive side when she recorded four assists from the circle.

The 10-inning game was the longest since the Miners fell at Florida Atlantic on April 19, 2014 in 11 frames. Saturday�s extra inning nail-biter is tied for fourth longest in UTEP history. The longest was a 13-inning affair on May 7, 2009 against the East Carolina at the Conference USA Tournament in El Paso with UTEP coming out on top 4-3. The Miners played 11 innings twice, as the second was on April 7, 2013 at UCF. UTEP and Southern Miss went 10 frames on April 16, 2011, while another 10-inning contest happened on March 20, 2007 against no. 5 Arizona State � an 8-7 Miners� win.

UTEP 1, UTSA 8
The Roadrunners scored five runs the second inning to pull away from the Miners. Crawford connected on her sixth home run of the season, a solo shot and Loughman doubled in a pair of runs in the second.

Loughman gave her squad an 8-0 lead after she hit a three-run home run over right center.

The Miners received a RBI single from Taylor Sargent in the fifth; Brianna Red scored the run in the pinch-run situation for Kiki Pepi, who drew a walk to lead off the inning. It was Sargent�s first RBI since Feb. 25 when she connected on a two-run single at UC Riverside.

The Miners connected on nine hits on the day, led by Courtney Clayton, Cortney Smith and Taylor Sargent who each finished 2-for-4. Sargent tallied her first multi-hit game since March 18 against Middle Tennessee.

The information herein on "UTEP Rallies to Beat UTSA, 7-6, in 10 Innings; Moves One Game Up in C-USA West" is not intended to replace a one-on-one relationship with a qualified health care professional, or licensed physician, and is not medical advice. We encourage you to make your own healthcare decisions based on your research and partnership with a qualified healthcare professional.