Though they were full of fight, the UTEP Miners were edged by Interstate-10 rival NM State 4-3 on Senior Day Friday to close out the tennis regular season.

The Miners, who had six players for the first time since March 4, were able to field a full lineup. That helped the team get an early lead in the match, claiming the doubles point with wins on courts one and three. First, at the No. 1 position, Milou Pietersz and Lois Wagenvoort powered past NM State’s Vanessa Valdez and Rebecca Keijzerwaard 6-0, their first shutout as a pair.

Maria Paula Medina and senior Duda Santos, returning from injury, helped the effort with a 7-6 (7-5) victory over Lindsay Harlas and Gabrielle Joyce on court three. Senior Daphne Visscher and Raven Bennett fell 7-6 (9-7) to the Aggies’ Rimpledeep Kaur and Marie-Pier Thiffault.

For the first time since their Feb. 19 victory over Pac-12’s Colorado, the Miners entered singles play with a 1-0 lead. The Aggies did not go down easily, however, getting wins on courts one and five due to Santos’ and Bennett’s retirement from injury, and a 6-3, 6-2 Keijzerwaard victory on court three from Visscher.

The Aggies clinched the match with a win on court six, as Harlas upended Medina 6-4, 6-1.

Though they trailed 4-1, the Miners battled to secure a couple more points. The relentless junior Pietersz dropped her first set against Valdez 6-0 but dominated set two with a 6-1 victory and followed with a 7-5 triumph in set three. Wagenvoort took set one in a 6-3 fashion, but Thiffault evened up play with a 6-4 victory of her own. In the deciding set, Wagenvoort was able to work her way to a 6-4 victory.

The Miners will now look to prepare for the Conference USA Championships beginning April 20 in Denton, Texas. 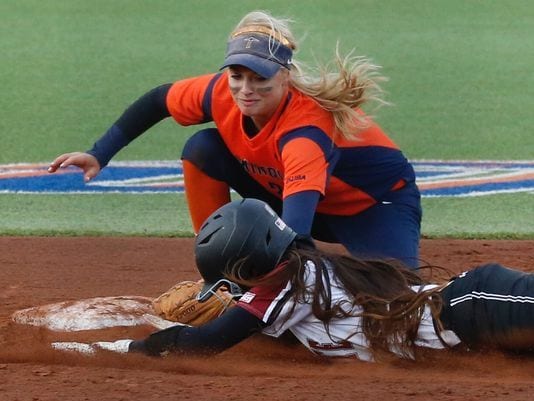 The UTEP softball team registered 21 hits in it two contests against NM State, but the Aggies (12-16) took both games, 8-4 and 13-4 (5), on a chilly and windy Tuesday night at the Helen of Troy Softball Complex.

The Miners (8-23, 3-6 Conference USA) will continue league action at UTSA on April 1-2, followed by a pair of contests at Incarnate Word on April 3.

UTEP 4, NM State 8
The Aggies took an early 5-1 advantage, but the Miners cut the deficit to one run after a three-run sixth. With one out, Mallorie Cross doubled up the middle and Bryanna Molina recorded her first collegiate hit, a single to right. Miranda Gutierrez was inserted as a pinch runner for Molina. Kaitlin Ryder, whose bat has been on fire, came up with a two-run double, while Blair crossed the dish later in the frame on an error by the catcher. But with two runners on and two outs, UTEP couldn�t sustain anymore offense.

NM State scored three runs in the top seventh to pull away for the victory.

The Miners racked up 14 hits in the contest, led by Ryder�s 3-for-4 outing (tied career high in hits). Lindsey Sokoloski went 2-for-4, while Blair finished 2-for-3. Cross registered a pair of hits on a 2-for-4 performance, while throwing two more base stealers out.

UTEP 4, NM State 13 [5] The Miners took a 1-0 lead on the first when Pamala Baber was hit by a pitch with bases loaded. But the Aggies answered in the next frame with nine runs led by a NIkki Butler two-run home run.

Ryder tallied an RBI in the second to make the score 9-2, but Victoria Castro connected on a solo home run in the third, and Butler hit her second dinger of the contest, a two-run shot in the fourth.

The Miners scored a pair of runs in the fifth as Cortney Smith and Courtney Clayton each tallied a RBI. 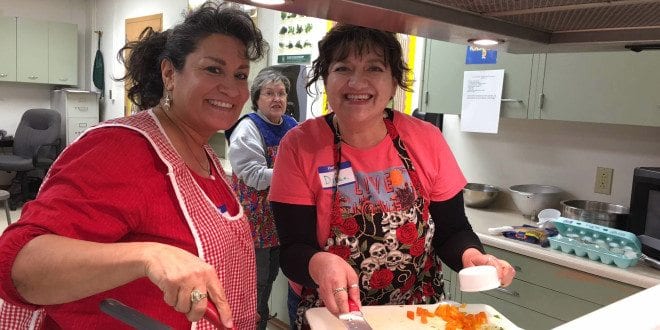 The cooking schools are free thanks to funding from the New Mexico Department of Health Diabetes Prevention and Control Program.

“There was so much interest in our last Kitchen Creations session that we were able to schedule two more for April, one in English and one in Spanish,” said Karim Martinez, Doña Ana County Extension Home Economist.

Each Kitchen Creations session consists of four classes taught by a registered dietitian and an Extension Home Economist. Participants will learn food safety, how to plan meals, measure appropriate serving sizes, read food labels, balance carbohydrates and other useful cooking tips. Participants will also prepare and sample a variety of recipes during each class.

Research has shown diabetes complications may be decreased when blood glucose levels are maintained within a range that mimics “normal” levels. In order to achieve these levels, people diagnosed with diabetes are often prescribed lifestyle changes such as diet modification.

According to New Mexico’s Indicator-Based Information System, nearly 11 percent of adults in New Mexico were living with diabetes between 2011 and 2013. The national average during the same time period was about 10 percent.

“Many people with diabetes are not sure what to do to improve their health, especially when it comes to food,” said Cassandra Vanderpool, registered dietitian and extension diabetes coordinator for NMSU’s Department of Extension Family and Consumer Sciences. “Kitchen Creations goes beyond simply providing nutrition information to engaging participants in hands-on cooking and other activities so they can immediately apply what they are learning.”

Vanderpool said that last year, more than 400 people attended Kitchen Creations cooking schools. At the last class, Vanderpool said, every participant reported they understood strategies to plan and prepare healthy meals, and that they were satisfied with the classes.

“Several months after attending the Kitchen Creations cooking school in Valencia County, a participant called the home economist to share her good news,” Vanderpool said. “She had just returned from the doctor, and her A1C had dropped. She attributed the improvement to the changes that she and her husband, who also attended the classes, had made in their cooking and eating habits as a result of what they learned from Kitchen Creations.”

To enroll in the Kitchen Creations cooking school, contact the Doña Ana Cooperative Extension Service at 575-525-6649.