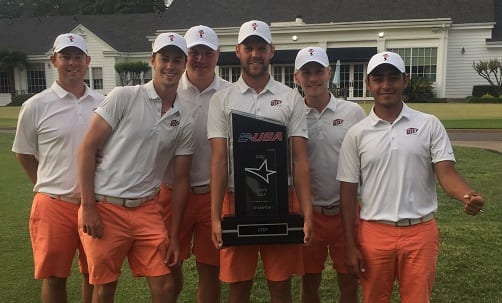 SAMMAMISH, Wa.- After a nearly four hour rain delay at the start of the second round of the NCAA Washington Regional on Tuesday, the UTEP men’s golf team finished the day in 10th place after shooting 23-over 591 (297-294). Play at the Aldarra Golf Club will conclude tomorrow with the Miners beginning to tee off 9:25 a.m. MT.

Charles Corner continued his strong play, finishing the day with a round of 74 to sit in a tie for 16th with 2-over 144 (70-74). The junior recorded an eagle, his first of the season, on a par 5 on hole no. 3 and birdied on hole no. 6. Senior Frederik Dreier had a huge turnaround after round one, shooting a second round total of 68, the Miners’ lowest round score so far, to share a part of the 16th spot with teammate Corner. Dreier had a huge start from hole no. 10, collecting three consecutive birdies and then adding two more on the front nine.

Aaron Terrazas, who put together a great opening round, slipped down the leader board to tie for 43rd after a second round total of 77. He will enter the third and final round with a tournament total of 8-over 150 (73-77). The sophomore collected a birdie on hole no. 8.

Live stats for the third and final round of the NCAA Washington Regional will be available via golfstat.com and the UTEP men’s golf Twitter page (@UTEPminergolf) will be updated periodically with scores.