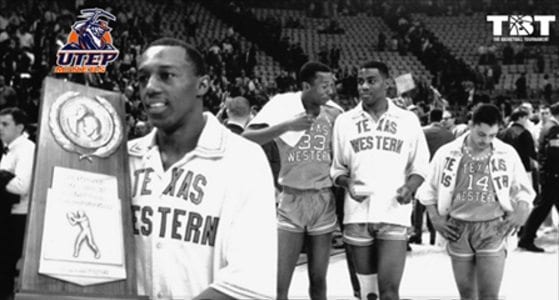 Several well-known Miners have formed an alumni basketball team and, with the support and votes from UTEP fans, hope to make a national tournament that pays the winners $2million for the win.

The team, known as the �Glory Road Boys�, is made up of five former players: Omar Duran, Earvin Morris, Brent Murphy, Ioana Tofi and Jason Williams. �The team is looking to make the The Basketball Tournament (TBT), a national basketball tournament to be held this summer, similar in structure to the NCAA�s annual college basketball tournament.

The main difference, according to the TBT website, is�64 teams (with 16 in each region) are either selected based on their fan vote totals or play their way into the tournament.

The final team in each region will play-in through the TBT Jamboree in Philadelphia, set for June 17th and 18th.

The winner-take-all $2 million purse is divided among the team, their coach, a booster, a top fan and 99 other fans who voted their team into the 64-team tournament.

The bio for the �Glory Road Boys� reads as follows:

�We are very excited for the opportunity to represent our University and the great city of El Paso. Our identity comes primarily from our school�s great basketball tradition. The fact that UTEP is the only school from Texas to win a National Championship is astonishing considering all the great Universities and tradition of great players from Texas. Also for the fact that the Disney movie Glory Road demonstrated how the 1966 team broke color barriers and changed basketball is very appealing to some who might not know the story behind it. We also have a strong competitive players that are elite on their teams overseas and want to represent a great basketball alumni group of UTEP.��Omar Duran, GM

Should the team get the required number of fans signed up and voting, the team would be part of the West Region. �To sign up to vote and support the team, click HERE.