Comparison of Chiropractic & Hospital Outpatient Care for Back Pain

Back pain is one of the most common causes people visit their healthcare professional every year. A primary care physician is often the first doctor who can provide treatment for a variety of injuries and/or conditions, however, among those individuals seeking complementary and alternative treatment options for back pain, most people choose chiropractic care. Chiropractic care focuses on the diagnosis, treatment and prevention of trauma and disease of the musculoskeletal and nervous systems, by correcting misalignments of the spine through the use of spinal adjustments and manual manipulations.

Approximately 35% of individuals seek chiropractic treatment for back pain caused by automobile accidents, sports injuries, and a variety of muscle strains. When people suffer an trauma or injury as a result of an accident, however, they may first receive treatment for their symptoms of back pain in a hospital. Hospital outpatient care describes treatment which does not require an overnight stay at a medical facility. A research study conducted an analysis comparing the effects of chiropractic care and hospital outpatient management for back pain. The results are described in detail below.

Objective: To compare the effectiveness over three years of chiropractic and hospital outpatient management for low back pain.

Setting: Chiropractic clinics and hospital outpatient departments within reasonable travelling distance of each other in I I centres.

Subjects: 741 men and women aged 18-64 years with low back pain in whom manipulation was not contraindicated.

Outcome measures: Change in total 0swestry questionnaire score and in score for pain and patient satisfaction with allocated treatment.

Conclusions: At three years the results confirm the findings of an earlier report that when chiropractic or hospital therapists treat patients with low back pain as they would in day to day practice those treated by chiropractic derive more benefit and long term satisfaction than those treated by hospitals.

In 1990 we reported greater improvement in patients with low back pain treated by chiropractic compared with those receiving hospital outpatient management. The trial was “pragmatic” in allowing the therapists to treat patients as they would in day to day practice. At the time of our first report not all patients had been in the trial for more than six months. This paper presents the full results up to three years for all patients for whom follow up information from Oswestry questionnaires and for other outcomes was available for analysis. We also present data on pain from the questionnaire, which is by definition the main complaint prompting referral or self referral.

Methods were fully described in our first report. Patients initially referred or presenting either to a chiropractic clinic or in hospital were randomly allocated to be treated either by chiropractic or in hospital. A total of 741 patients started treatment. Progress was measured with the Oswestry questionnaire on back pain, which gives scores for I 0 sections for example, intensity of pain and difficulty with lifting, walking, and travelling. The result is expressed on a scale ranging from 0 (no pain or difficulties) to 100 (highest score for pain and greatest difficulty on all items). For an individual item, such as pain, scores range from 0 to 10. The main outcome measures are the changes in Oswestry score from before treatment to each follow up. At one, two, and three years patients were also asked about further treatment since the completion of their trial treatment or since the previous annual questionnaire. At the three year follow up patients were asked whether they thought their allocated trial treatment had helped their back pain.

In the random allocation of treatment minimisation was used within each centre to establish groups for the analysis of results according to initial referral clinic, length of current episode (more or less than ‘a month), presence or absence of a history of back pain, and an Oswestry score at entry of > 40 or <=40%.

Results were analysed on an intention to treat basis (subject to the availability of data at follow up as well as at entry for individual patients). Differences between mean changes were tested by unpaired t tests, and X2 tests were used to test for differences in proportions between the two treatment groups.

Chiropractic is a natural form of health care which purpose is to restore and maintain the function of the musculoskeletal and nervous systems, promoting spinal health and allowing the body to heal itself naturally. Our philosophy emphasizes on the treatment of the human body as a whole, rather than on the treatment of a single injury and/or condition. As an experienced chiropractor, my goal is to properly assess patients in order to determine which type of treatment will most effectively heal their individual type of health issue. From spinal adjustments and manual manipulations to physical activity, chiropractic care can help correct spinal misalignments that cause back pain. 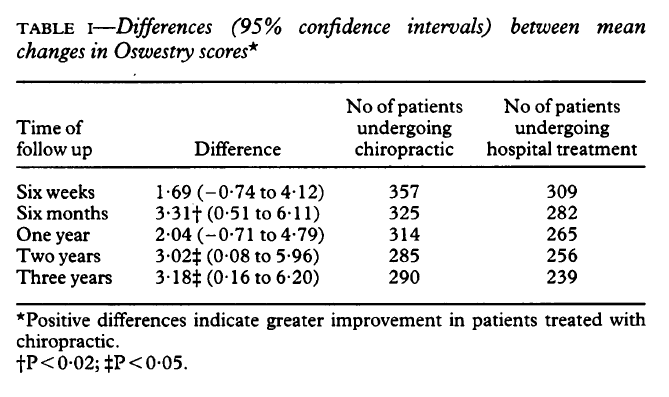 Positive differences therefore reflect more improvement (due to a greater change in score) in those treated by chiropractic than in hospital (negative differences the reverse). The 3-18 percentage point difference at three years in table I represents a 29% greater improvement in patients treated with chiropractic compared with hospital treatment, the absolute improvement in the two groups at this time being 14-1 and 10-9 percentage points, respectively. As in the first report those with short current episodes, a history of back pain, and initially high Oswestry scores tended to derive most benefit from chiropractic. Those referred by chiropractors consistently derived more benefit from chiropractic than those referred by hospitals.

Table II shows changes between the scores on pain intensity before treatment and the corresponding scores at the various follow up intervals. All these changes were positive that is, indicated improvement but were all significantly greater in those treated by chiropractic, including the changes early on that is, at six weeks and six months, when the proportions returning questionnaires were high. As with the results based on the full Oswestry score the improvement due to chiropractic was greatest in those initially referred by chiropractors, although there was also a non-significant improvement (ranging from 9% at six months to 34% at three years) due to chiropractic at each follow up interval in those referred by hospitals. 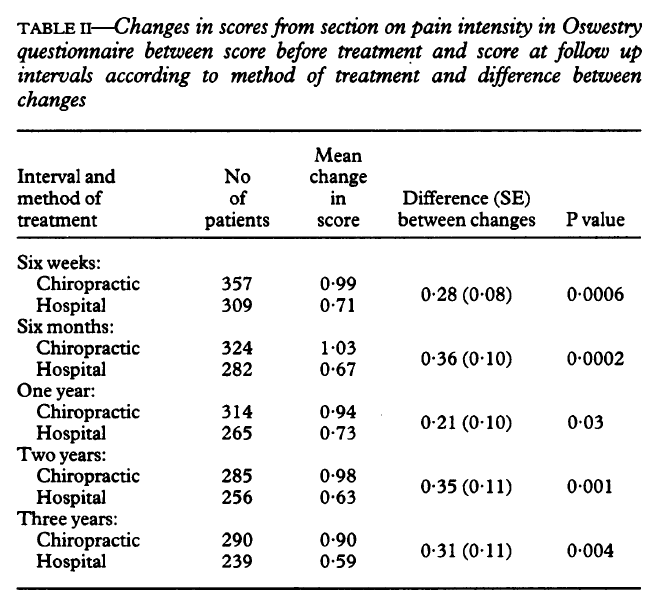 Other scores for individual items on the Oswestry index to show significant improvement attributable to chiropractic were ability to sit for more than a short time and sleeping (P=0’004 and 0 03, respectively, at three years), though the differences were not as consistent as for pain. Other scores (personal care, lifting, walking, standing, sex life, social life, and travelling) also nearly all improved more in the patients treated with chiropractic, though most of the differences were small compared with the differences for pain.

Higher proportions of patients allocated to chiropractic sought further treatment (of any kind) for back pain after completion of trial treatment than those managed in hospital. For example, between one and two years after trial entry 122/292 (42%) patients treated with chiropractic compared with 80/258 (3 1%) of hospital treated patients did so (Xl=6 8, P=0 0 1).

Table III shows the proportions of patients at three years who thought their allocated trial treatment had helped their back pain. Among those initially referred by hospitals as well as among those initially referred by chiropractors higher proportions treated by chiropractic considered that treatment had helped compared with those treated in hospital.

The results at six weeks and six months shown in table I are identical with those in our first report, as all patients had then been followed up for six months. The findings at one year are similar as many patients had also been followed up then. The considerably larger numbers of patients with data now available at two and three years show smaller benefits at these intervals than previously, though these still significantly favour chiropractic. The substantial benefit of chiropractic on intensity of pain is evident early on and then persists. The consistently larger proportions lost to follow up throughout the trial in those treated in hospital than in those treated by chiropractic suggests greater satisfaction with chiropractic. This conclusion is supported (table III) by the higher proportions in each referral group considering chiropractic helpful by comparison with hospital treatment. 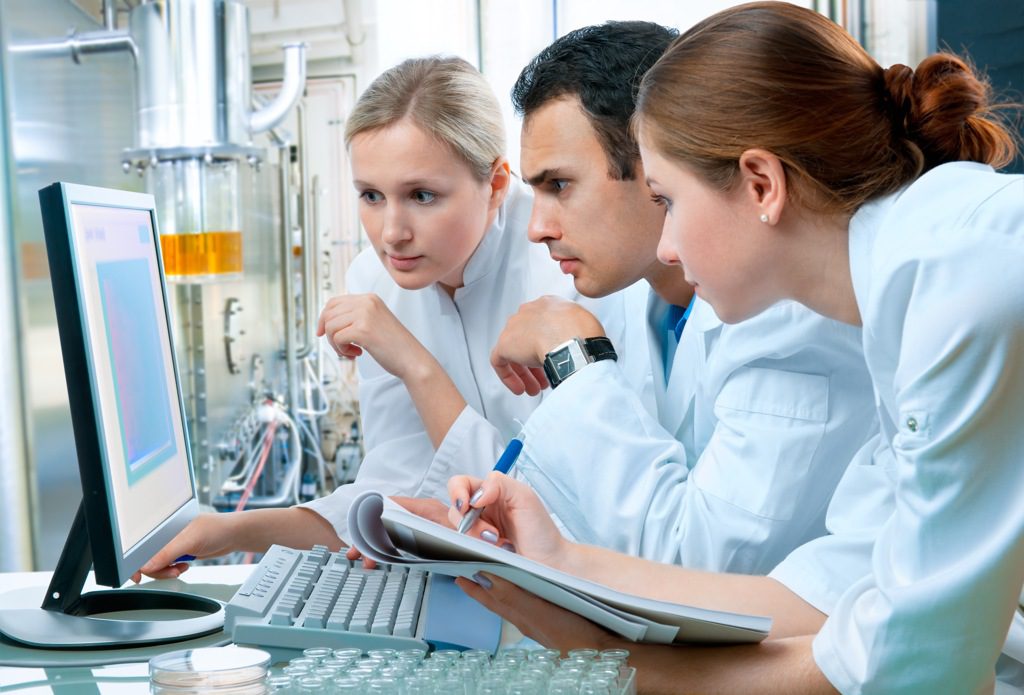 The main criticism of the trial after our first report centred on its “pragmatic” nature, particularly the larger number of chiropractic than hospital treatments and the longer period over which the chiropractic treatments were spread and which were deliberately allowed. These considerations and any consequences of the higher proportions of patients allocated to chiropractic who received further treatment in the later stages of follow up, however, do not apply to the results at six weeks and only apply to a limited extent at six months, when the proportions followed up were high and extra treatment had either not occurred at all or was not yet extensive. Benefits atributable to chiropractic were already evident (especially on pain, table II) at these shorter intervals.

We believe there is now more support for the need for “fastidious” trials focusing on specific components of management and on their feasibility. Meanwhile, the results of our trial show that chiropractic has a valuable part to play in the management of low back pain.

We thank Dr Iain Chalmers for commenting on an earlier draft of the paper. We thank the nurse coordinators, medical staff, physiotherapists, and chiropractors in the 11 centres for their work, and Dr Alan Breen of the British Chiropractic Association for his help. The centres were in Harrow Taunton, Plymouth, Bournemouth and Poole, Oswestry, Chertsey, Liverpool, Chelmsford, Birmingham, Exeter, and Leeds. Without the assistance of many staff members in each the trial could not have been completed.

Conflict of interest: None.

In conclusion,�after three years, the results of the research study comparing chiropractic care and hospital outpatient management for low back pain determined that people treated by chiropractic experienced more benefits as well as long-term satisfaction than those treated by hospitals. Because back pain is one of the most common�causes people visit their healthcare professional every year, its essential to seek the most effective type of health care. Information referenced from the National Center for Biotechnology Information (NCBI). The scope of our information is limited to chiropractic as well as to spinal injuries and conditions. To discuss the subject matter, please feel free to ask Dr. Jimenez or contact us at 915-850-0900 .

Sciatica is referred to as a collection of symptoms rather than a single type of injury or condition. The symptoms are characterized as radiating pain, numbness and tingling sensations from the sciatic nerve in the lower back, down the buttocks and thighs and through one or both legs and into the feet. Sciatica is commonly the result of irritation, inflammation or compression of the largest nerve in the human body, generally due to a herniated disc or bone spur.