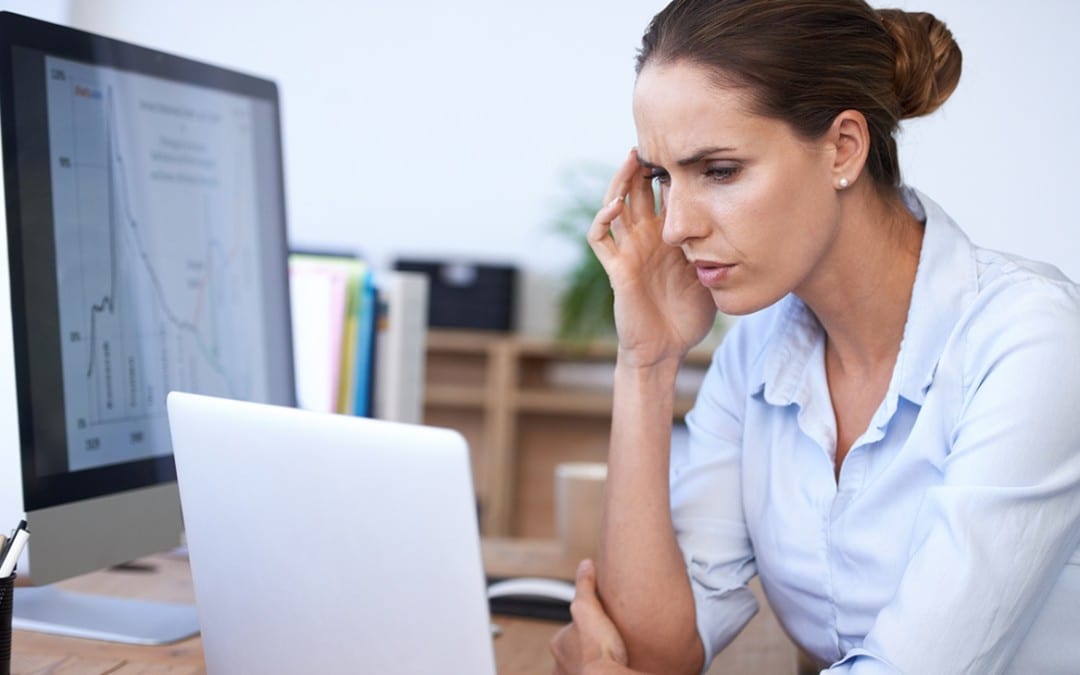 � Although elevated levels of inflammatory markers have been found in the blood,1 CSF,2 and brain parenchyma3 of individuals with cognitive impairment and Alzheimer disease (AD), it remains unclear whether this heightened inflammatory state is driving neurodegenerative changes. If low-grade systemic inflammation does play a causal role in AD and other neurodegenerative diseases, a heightened inflammatory response during midlife would be expected to increase one’s risk for pathologic brain changes much later. Although cross-sectional studies have demonstrated a link between elevated inflammatory markers and reduced brain volume in older adults,4,�7 it remains unclear whether systemic inflammation during midlife, before the onset of significant age- and disease-related neurologic changes, is associated with brain volume loss later in life. � The goal of the current study was to examine how midlife plasma markers of inflammation relate to late-life brain volume among a biracial community sample of older adults. To this end, we examined the relationship between 5 markers of systemic inflammation measured during midlife and MRI measures of regional brain volume 24 years later in the Atherosclerosis Risk in Communities (ARIC) Study cohort. We tested the hypothesis that greater midlife systemic inflammation is associated with smaller brain volumes in regions most susceptible to AD-related atrophy and reduced episodic memory in older adulthood. Based on cross-sectional evidence suggesting that race, sex, and age may modify the association between inflammatory markers and brain volume,5,8,9 the current study also examined the modifying effects of each of these demographic characteristics. �

� Study population characteristics. A total of 1,633 participants (baseline mean age 52.8 [5.3] years, 27% African American, 60% women, 46% college or professional degree) were included in the study sample. The time between baseline assessment and follow-up MRI scan was 24 (1) years; the average age at follow-up was 76.5 (5.4) years. As shown in table 1, a higher inflammation composite score at baseline was associated with older age, female sex, African American race, and increased levels of a number of cardiovascular risk factors. � 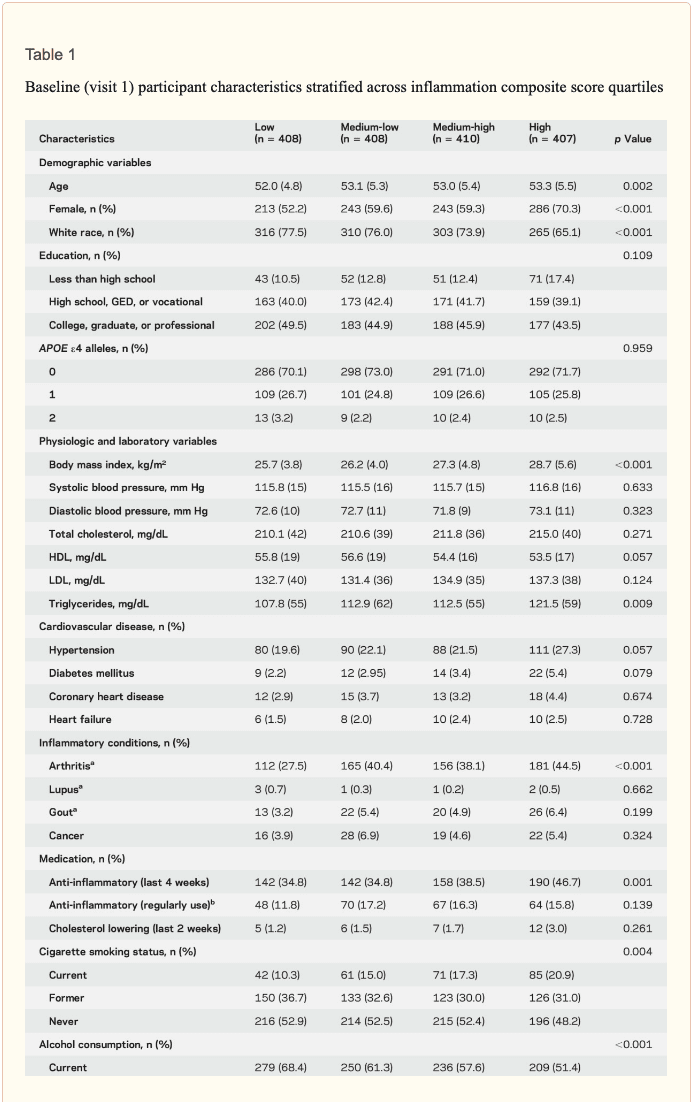 Inflammatory markers and brain volume. Each SD increase in inflammation composite score at baseline was associated with a 532 mm3 smaller AD signature region volume (95% confidence interval [CI] ?922 to ?141), a 519 mm3 smaller occipital lobe volume (CI ?906 to ?132), a 110 mm3 smaller hippocampal volume (CI ?196 to ?24), and a 1,788 mm3 larger ventricular volume (CI 371 to 3,205) at follow-up (table 2). We found the estimated effect of a 1 SD increase in inflammation composite score during midlife on occipital lobe, ventricular, and hippocampal volume to be similar to the effect associated with possession of a single APOE ?4 allele in our multivariable regression analyses. No association was found for the total brain, frontal lobe, temporal lobe, or parietal lobe volume (ps > 0.071). Our findings did not change meaningfully after excluding participants who regularly used anti-inflammatory medication during the follow-up period (table e-2) and after including participants who met the criteria for dementia at visit 5 (table e-3). For descriptive purposes, associations between individual inflammatory markers and AD signature region volume are provided in a table e-4. � 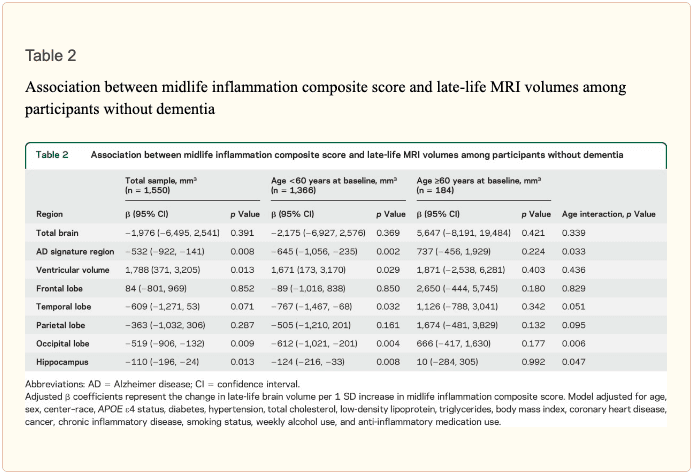 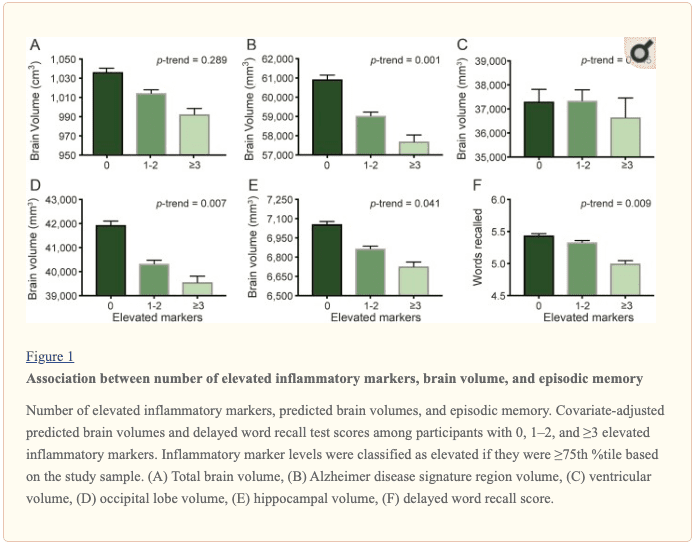 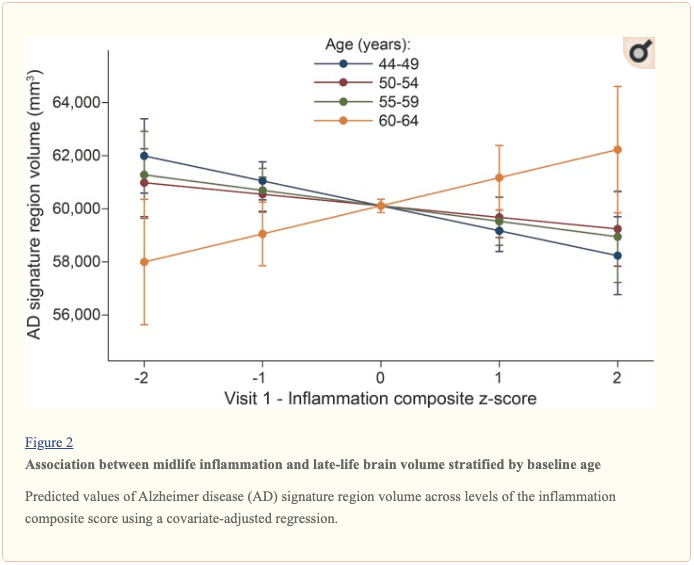 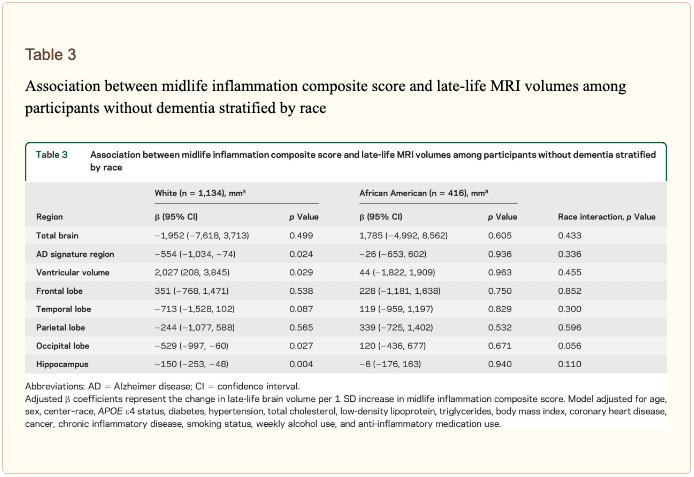 Inflammatory markers and episodic memory. Late-life episodic memory, which was associated with hippocampal and AD signature region volume after controlling for age (partial rs > 0.21, ps < 0.001), was reduced among participants with higher levels of the inflammation composite score. Each SD increase in inflammation composite score was associated with a ?0.08 SD performance decrement on the DWR after adjusting for covariates (CI ?0.15 to 0.00; p = 0.046). Similarly, a higher number of elevated inflammatory biomarkers at baseline was associated with reduced DWR performance (p trend = 0.009; figure 1). � 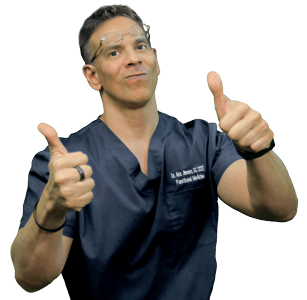 
The following Neurotransmitter Assessment Form can be filled out and presented to Dr. Alex Jimenez. Symptoms listed on this form are not intended to be utilized as a diagnosis of any type of disease, condition, or any other type of health issue. �

� In honor of Governor Abbott’s proclamation, October is Chiropractic Health Month. Learn more about the proposal. � Have you been experiencing noticeable variations in your mental speed? Do you suffer from pain, discomfort, and inflammation? Have you been experiencing fatigue, especially after meals or exposure to chemicals, scents, or pollutants?�Brain fog can cause a variety of symptoms, including memory and concentration as well as vision problems. According to the research study above, midlife inflammation and brain fog may be associated with Alzheimer’s disease. � The following article has been referenced from the National Center for Biotechnology Information (NCBI). The scope of our information is limited to chiropractic, musculoskeletal and nervous health issues or functional medicine articles, topics, and discussions. We use functional health protocols to treat injuries or disorders of the musculoskeletal system. To further discuss the subject matter above, please feel free to ask Dr. Alex Jimenez or contact us at 915-850-0900 . �

� Sudden pain is a natural response of the nervous system which helps to demonstrate possible injury. By way of instance, pain signals travel from an injured region through the nerves and spinal cord to the brain. Pain is generally less severe as the injury heals, however, chronic pain is different than the average type of pain. With chronic pain, the human body will continue sending pain signals to the brain, regardless if the injury has healed. Chronic pain can last for several weeks to even several years. Chronic pain can tremendously affect a patient’s mobility and it can reduce flexibility, strength, and endurance.

� For your convenience and review of the XYMOGEN products please review the following link.*XYMOGEN-Catalog-Download �