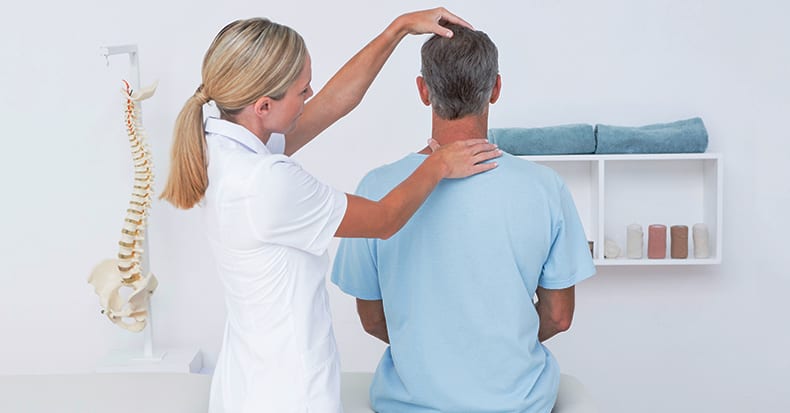 Abstract:  To examine the diagnosis and condition of a patient suffering from neck pain and radiation of pain into arms following a motor vehicle accident.   Diagnostic studies include the chiropractic orthopedic and neurological examination, digital x-rays, range of motion and cervical MRI.

Introduction:  On 10/10/2016, a 38-year-old male presented to our office for injuries he had sustained in an MVA on 10/01/2016.  The patient stated that he was stopped at an intersection when the pickup behind him hit him at a fast speed, pushing him through the intersection.  The patient stated that he had neck pain and stiffness the radiated into the trapezius area.  He also complained about �tingling� into both hands.  He also complained of lower back pain that he felt more than the neck.  His review of systems was benign, other than the current symptoms of neck and back pain and tingling.

Clinical Findings of Chiropractic and Myelomalacia

An evaluation and management exam was performed.  The exam consisted of a visual inspection of the spinal ranges of motion, digital palpation, manual testing of muscles, deep tendon reflexes and orthopedic and neurological findings. The Cervical exam showed the following decreased motion on visual exam in flexion, extension, left rotation, right rotation, right lateral flexion and left lateral flexion.  All of the above motions produced pain.

When digital palpation was performed in the cervical and thoracic spinal areas, there was moderate spasm noted bilaterally in paraspinal areas with moderate tenderness noted.

In performing the cervical orthopedic and neurological testing, positive findings were present bilaterally with Foraminal Compression and Foraminal Decompression.  Soto Hall test was positive when performed in the thoracic spine area.  Manual, subjectively rated muscle testing was performed on certain muscles of the upper extremities.  Based on the AMA Guides to the Evaluation of Permanent Impairment, 4th Ed., 1993/5th ed. 2001, differences were noted using the rating scale of five to zero.  Five is full Range of Motion/Maximum Strength, Four is Full Range of motion with Moderate Resistance, Three is Full Range of Motion/Perceptible Weakness. The Deltoids and Triceps tested normally bilaterally at 5. The Biceps, forearm muscles and the intrinsic hand muscles all tested as a four on the right and a three on the left.

Deep Tendon Reflexes were performed on the patient and were noted at a plus two bilaterally.

Using a Whartenburg pinwheel, dermatomes showed normal findings except for C8, which was hyposensitive on the left.

A Lumbar orthopedic and neurological exam was then performed.  Upon visual examination, there was decreased motion in flexion, extension. right and left lateral flexion with pain present on all of the motions.

Digital palpation was performed and there was severe tenderness and spasm bilaterally in the lumbar paraspinal muscles.

Manual, subjectively rated muscle testing was performed on certain muscles of the lower extremities.  Based on the AMA Guides to the Evaluation of Permanent Impairment, 4th Ed., 1993/5th ed. 2001, differences were noted using the rating scale of five to zero.  Five is full Range of Motion/Maximum Strength, Four is Full Range of motion with Moderate Resistance, Three is Full Range of Motion/Perceptible Weakness.    Muscle testing was done bilaterally in the Quadriceps, Hamstrings, Calf Muscles and Extensor Hallicus Longus and showed Full ROM and Strength.

Deep Tendon Reflexes were performed.  They negative in the Achilles bilaterally, but +3 in the Patella bilaterally.

Based on the ortho/neuro findings and the history, the following x-rays were ordered:

AP/Lat/Lateral Flexion/Oblique Lumbar�s.  The x-rays were read and the Lumbar spine showed the discs were of a normal height and Georges line was un-interrupted.  There the Lumbar curve appeared to be hypolordotic.  On visual inspection, there was a decrease in the lateral bending bilaterally.

The Cervical spine showed that there was anterior spurring present in the C5/6 region of the cervical spine.  In the lateral view, the normal curvature of the spine was no longer lordotic, but noted as a �Military Neck.�  There was decreased range of motion noted in the flexion as well as the extension views.  Also, noted on flexion and extension was paradoxical motion present at C1.  Disc spaces were normal throughout the spine, except for narrowing of the disc space at C5/6, as well as spurring noted in the anterior part of the vertebral body.

Due to the injuries, orthopedic and neurological and x-ray findings, a cervical MRI was ordered.  I recommended that the patient receive palliative therapy until a Cervical MRI could be obtained.

At C5/6, there is a moderate disc bulge which indents the ventral cord and results in severe spine canal stenosis.  There is resultant abnormal signal in the spinal cord at C5/6, which may represent myelomalacia or edema.

An alert was placed on this study. The patient contacted our office and thanked us for being so adamant about his treatment.

There is much discussion in the MRI report concerning �bulges� and one must first have a handle on what is a bulge and herniation.

2. (Nonstandard) A disc in which the outer margin extends over a broad base beyond the edges of the disc space.

4. (Nonstandard) Any disc displacement at the discal level.

Note: Bulging is an observation of the contour of the outer disc and is not a specific diagnosis. Bulging has been variously ascribed to redundancy of the annulus, secondary to the loss of disc space height, ligamentous laxity, response to loading or angular motion, remodeling in response to adjacent pathology, unrecognized and atypical herniation, and illusion from volume averaging on CT axial images. Mild, symmetric, posterior disc bulging may be a normal finding at L5�S1. Bulging may or may not represent pathological change, physiological variant, or normalcy. Bulging is not a form of herniation; discs known to be herniated should be diagnosed as herniation or, when appropriate, as specific types of herniation.� Pg. 2537(1)

Studin and Owens discuss this �nomenclature� in their article �Bulging Discs and Trauma: Causality and a Risk Factor�.

�There is now, based upon the literature and well respected experts, categories of disc bulges that can be deemed as direct sequella from trauma vs. those cases where there is pre-existing degeneration.  It can also now be concluded, again based upon the literature that those patients can have an aggravation of the pre-existing condition that could persist a lifetime requiring perpetual care. To conclude these findings, a doctor trained in understanding the underlying pathology and sequella must be consulted to be able to render an accurate diagnosis that is demonstrable.�2 Pg. 26

What is Myelomalacia?  According to the MedicoLexicon, it is simply the �softening of the spinal cord�.3  Basically, it is ischemia that takes place in the spinal cord from abnormal pressure placed upon it.  If left untreated, then that continues to spread and cause further damage to the cord.  Once the cord has been damaged, there is no repair.  Brandy Carrelli gives us a concise definition and the ramifications of it left untreated:

�The myelomalacia definition, strictly speaking is the �softening of the spinal cord�.  After an acute injury, bleeding of the spinal cord may occur.  As a result, there is �subsequent softening of normal tissues�.  Myelomalacia can be caused by trauma or disease, but if it worsens, and if the bleeding reaches the cervical region of the body, it can be fatal.  Bleeding can make the tissue necrotic.  Fractured vertebrae can lead to bleeding in the spinal cord, as can some back surgery.  Osteoporosis may also contribute to spinal instability and hemorrhaging.  Sometimes circulatory problems can lead to a deterioration of tissues and bleeding.  Myelomalacia can progress into impairment in the functioning of the lower extremities, below-normal or absent reflexes of the anus and pelvic limbs, loss of pain perception in the caudal region (near the coccyx), depression, respiratory problems due to �diaphragmatic paralysis�, and even neurological issues.  Death could result from the respiratory paralysis.  Damage occurs to the central nervous system.  At first, the spinal cord damage may be minor.  The most commonly injured areas are the lumbar spine (lower back) and cervical vertebrae (upper spine area).4

Disc degeneration, herniations (all variations) and bulging all describe what has happened to the disc itself.  Once you have established a definitive diagnosis, then the question becomes, how is the disc affecting surrounding neurological components?  Myelomalacia is the effect of that disc when the cord is affected by pressure.  If there is bleeding into the cord, then the cord begins a degenerative spiral that can happen rather quickly.  As you have read above, it can take what may simply appear as a minor issue to the patient that can lead to major neurological compromise and in extreme cases may lead to paralysis or death. Therefore, it is important carefully analyze the clinical indicators and image accordingly.

Myelomalacia is a relatively rare occurrence.  According to Zhou, Kim, Vo and Riew,

�The overall prevalence of cervical myelomalacia was relatively low in the studied population, and it was affected by age, sex, and the specialties/subspecialties of referring providers. These results may help direct treatment guidelines and allow for informed discussions with patients in terms of the risk versus the benefit of surgery.�5  Pg. E252

It is a very common occurrence for the presence of disc bulging and herniations in chiropractic practices.  It is of utmost importance for the chiropractor to not only order MRI when clinically indicated, it is important to be able to interpret those images as well.  Once the clinical indicators begin to show a different story than presented by the patient symptomatically, it is the responsibility of the chiropractor to make the appropriate diagnosis, prognosis and treatment plan.  In this case, that is an immediate neurosurgical referral.  Although not a common finding in a chiropractic office, one must still be alert to the possibility of Myelomalacia.   Managing the patient based upon an accurate diagnosis is your ultimate goal, and sometimes adjusting the patient isn�t the best first option as diagnosis and prognosis supersede treatment.

The scope of our information is limited to chiropractic and spinal injuries and conditions. To discuss options on the subject matter, please feel free to ask Dr. Jimenez or contact us at 915-850-0900 .

After being involved in an automobile accident, many victims frequently report neck or back pain due to damage, injury or aggravated conditions resulting from the incident. There’s a variety of treatments available to treat some of the most common auto injuries, including alternative treatment options. Conservative care, for instance, is a treatment approach which doesn’t involve surgical interventions. Chiropractic care is a safe and effective treatment options which focuses on naturally restoring the original dignity of the spine after an individual suffered an automobile accident injury.