Individuals can develop a herniated, slipped or bulging disc in the neck or back.�Too much stress on the disc/s whether from poor posture, being overweight, injury, aging, and an unhealthy lifestyle can increase the risk for disc problems. Herniation can be caused by a combination of factors or physical injury. Several common questions about disc problems are answered.

A slipped disc can mean a ruptured or herniated disc. We use the term slipped disc, however, the discs do not slip. Each disc is sandwiched between two vertebrae that are supported by a system of ligaments that hold the spine together. A bulging or herniated disc is the proper term. 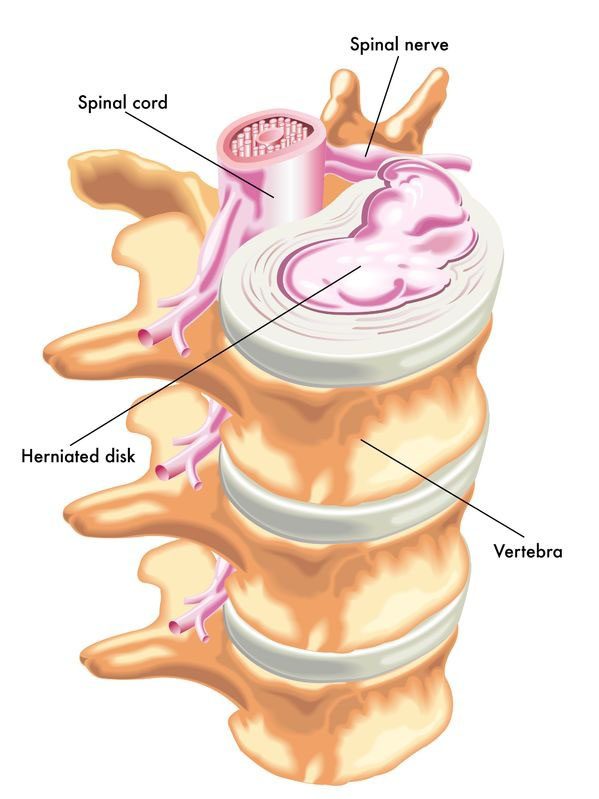 Difference Between a Bulging and Herniated Disc

Disc disorders are categorized as contained or non-contained. Bulging disc is an example of a contained disc disorder.

A bulging disc has not broken open meaning the nucleus is still contained inside the annulus fibrosus. The disc could protrude into the spinal canal without breaking open. The gel, the jelly interior does not leak out. The disc stays intact except a small bubble pops out. 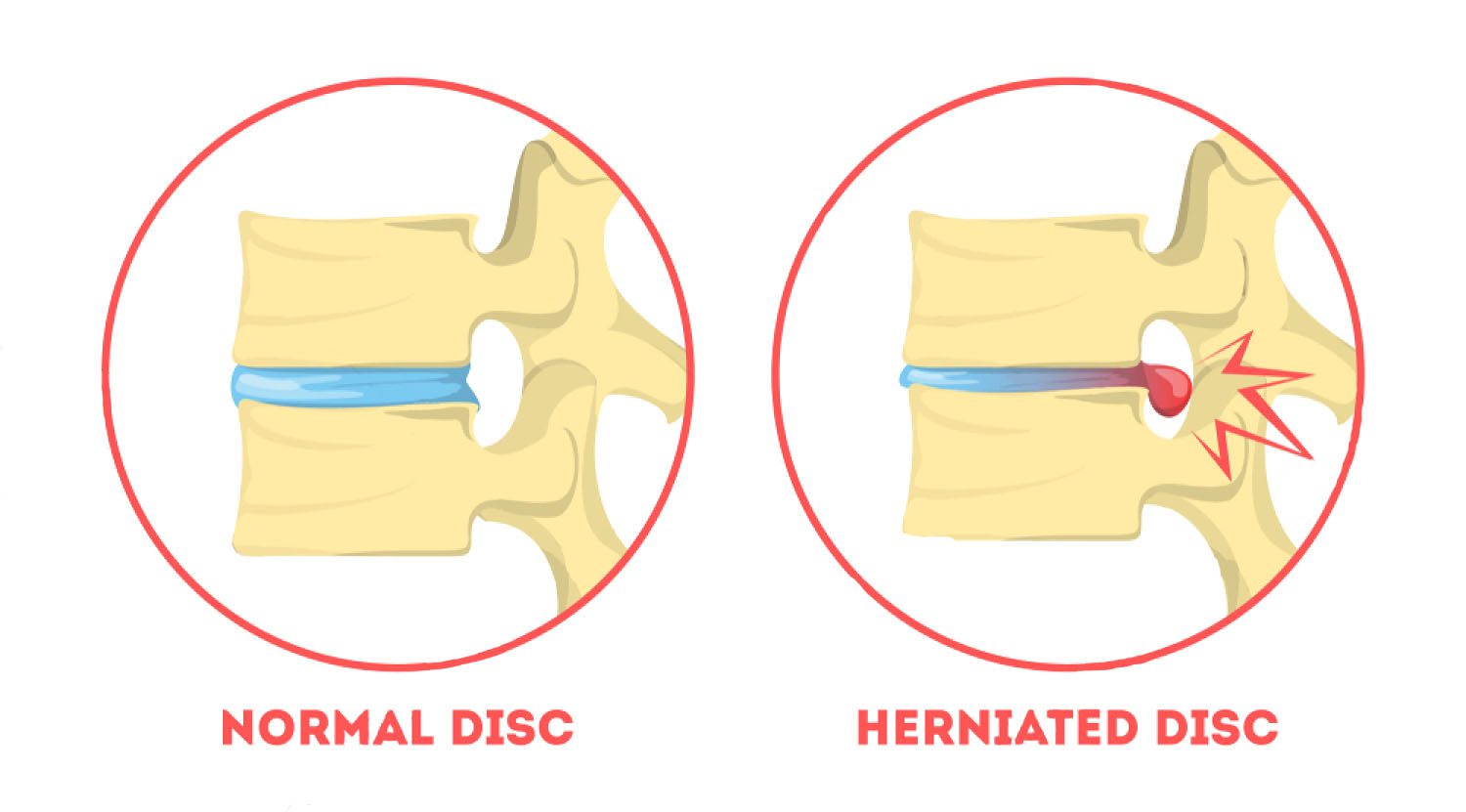 A non-contained disc has either partially or completely broken open, and that is a herniated/ruptured disc. Imagine a closed tube�being squeezed placed under pressure, which causes the contents to move wherever they can. If a portion of the tube is weak or there is too much pressure, the contents could leak or burst out. When a disc herniates the gel-like contents could spread out to the spinal cord and nerves.

Herniation Can Cause Pain

The disc’s gel-like nucleus has a chemical that irritates the nerves and causes them to become inflamed and swell. The chemical stays and continues to press on the irritated nerves. Sometimes fragments from the disc wall or the tube break off from the disc and drift into the spinal canal causing other nerves to inflame and swell. Based on the type of injury and condition of the discs, more than one disc could herniate, rupture, or bulge. Sometimes injury causes a combination of disc disorders.

Symptoms of a herniated disc can include:

Sometimes, however, a herniated disc does not cause any symptoms at all. When this happens it is called an asymptomatic herniated disc. Disc/s could be bulging or herniated, but if it or they are not applying pressure on the spinal nerve/s or the cord, symptoms like pain may not present. This makes a point about herniated disc symptoms that they are dependent on where you have a herniated disc. 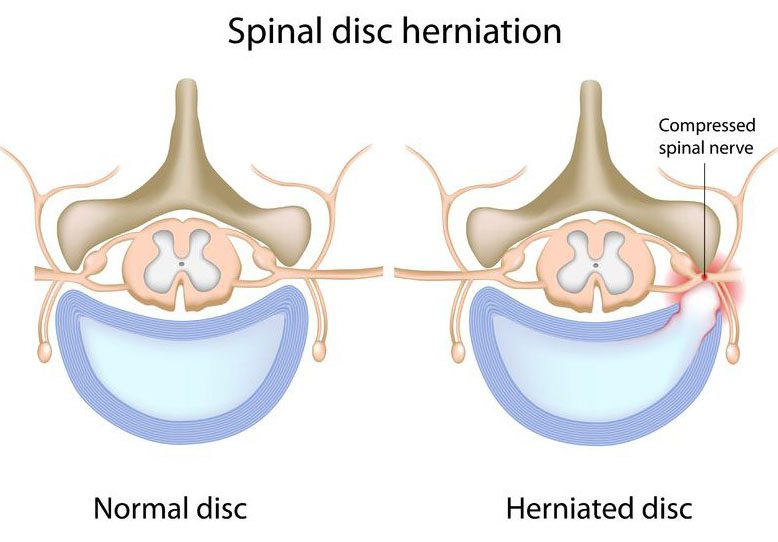 With a herniated or bulging disc in the neck, then you could experience:

With a herniated disc in the low back the following symptoms could happen:

Referred pain means that you have pain in another part of the body from the disc problem. An individual could have a bulging or herniated slipped disc in the low back and have pain in the leg. This is lumbar radiculopathy or sciatica. Usually, just one leg is affected. If you have a herniated disc in the neck, there could be referred pain going down the arm and into the hand. 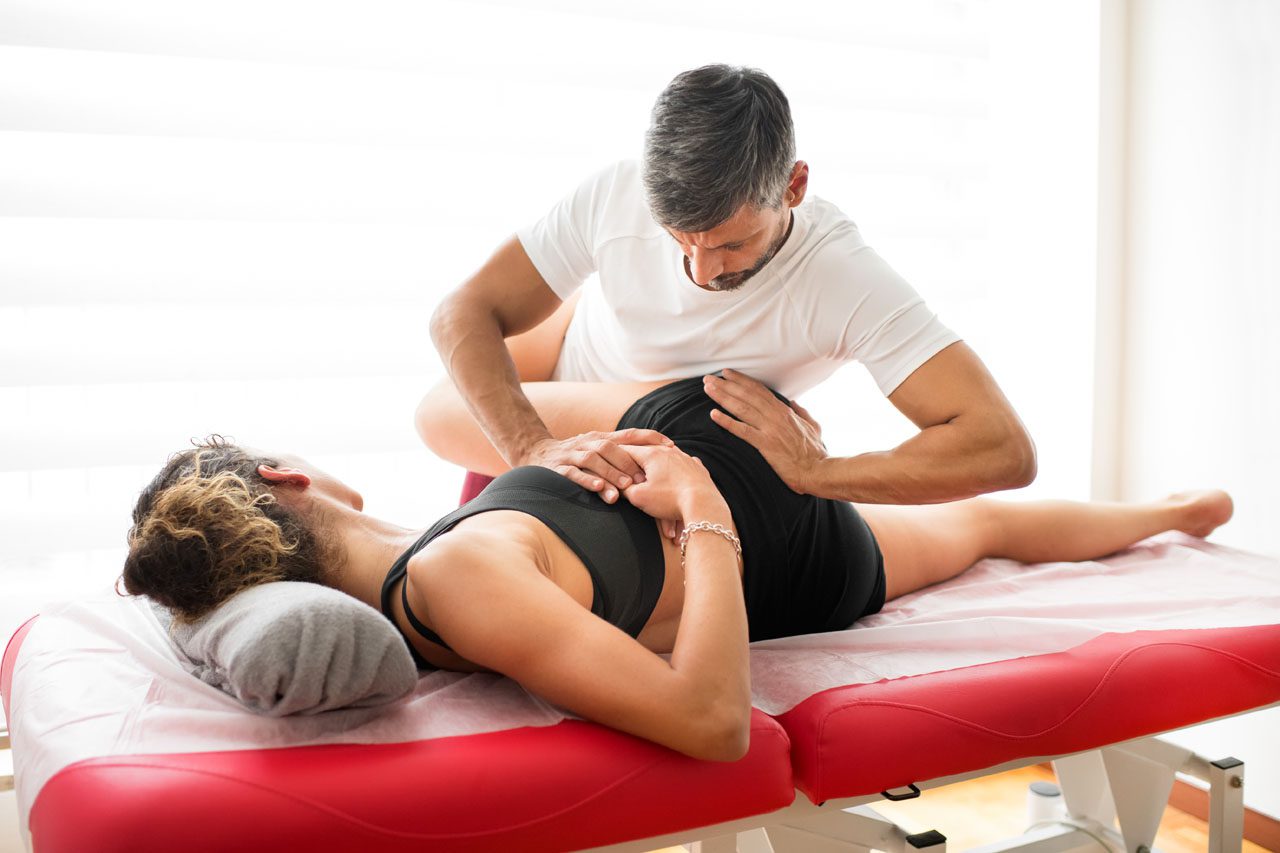 They will carefully look at posture, and will probably order an X-ray or MRI to help with the diagnosis.

Chiropractors evaluate the entire spine. Even if you only have lower back pain, your chiropractor will examine your neck, too. They want to see how well your spine is functioning overall. Remember what happens to one area of your spine can influence another part of the spine and/or body.

Pain from a herniated disc can make it difficult to enjoy daily life. Walking, sitting, and sleeping normally/comfortably can become a nightmare. You should make an appointment with a doctor or chiropractor if your herniated slipped disc symptoms last for more than two weeks.

In the United States alone, acute cases of lower back pain are the fifth most frequent reason for doctor visits and cause 40% of missed days off work. What�s more, it is the leading cause of disability worldwide.