Endocrine disruptors are chemicals that may interfere with the body’s endocrine system and produce adverse developmental, reproductive, neurological, and immune effects in humans. It can be pesticides, plasticizers, antimicrobials, and flame retardants that can be EDCs. EDCs (endocrine-disrupting chemicals) can disrupt the hormonal balance and can result in developmental and reproductive abnormalities in the body.

There are four points about endocrine disruption:

EDC can cause significant risks to humans by targeting different organs and systems in the body. The interactions and the mechanisms of toxicity created by EDC and environmental factors can be concerning a person’s general health problems. Including endocrine disturbances in the body since many factors can cause endocrine disruptors, one of the disruptors in the food contaminated with PBDEs (polybrominated diphenyl esters) in fish meat and dairy.

Researchers also pointed out that once the contaminated foods eliminated from a person’s diet, then the endocrine disruptors decline, and the body began to heal properly. When a person eliminates the food that is causing discomfort to their bodies, they are more aware of reading the food labels to prevent discomfort anymore to the body systems.

Obesogen is a subclass of endocrine-disrupting chemicals (EDC) that might predispose individuals to the development of obesity. Their structure is mainly lipophilic, and they can increase fat deposition. Since the fat cell’s primary role is to store and release energy, researchers have found that different obesogenic compounds may have different mechanisms of action.

Studies even stated that exposure to obesogens could be found either before birth on utero or in the neonatal period. Obesogens can even cause a decrease in male fertility. When this disruption happens to the male body, environmental compounds can cause a predispose to weight gain, and obesogens can appoint as one of the contributors because of their actions as endocrine disruptors. Obesogens can even change the functioning of the male reproductive axis and testicular physiology. The metabolism in the male human body can be pivotal for spermatogenesis due to these changes.

Some endocrine disruptors that can affect the body can be through pharmaceutical drugs that can cause weight gain. A variety of prescription drugs can have an adverse effect that can result in weight gain since the chemicals found in prescription drugs have similar structures, and modes of action might have a role in obesity. Prescription medicine can stimulate the gut to consume more food, thus involving the body to gain weight. 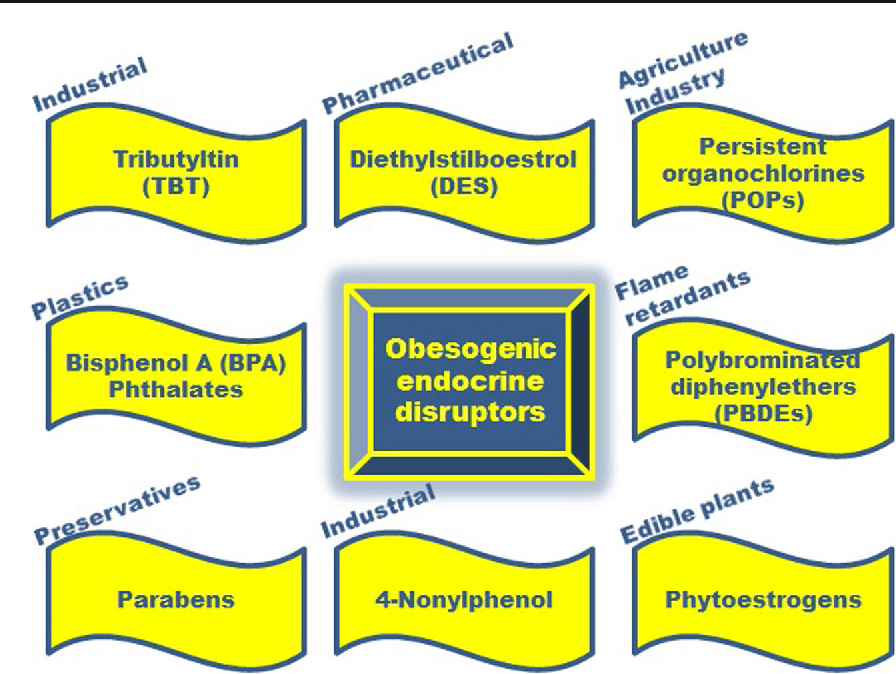 Another endocrine disruptor is PAHs (polycyclic aromatic hydrocarbons). These are a family of environmental chemicals that occur in oil, coal, and tar deposits. They produce as by-products of fuel-burning like fossil fuel, biomass, cigarette smoke, and diesel exhaust. PAHs can either be manufactured to be used as medicines and pesticides or be released naturally from forest fires and volcanoes.

There are standard ways a person can be exposed to PAHs. One is through eating grilled, charred, or charcoal-broiled meats that a person eats. The other is through inhalation of smoke from cigarettes, vehicle exhaust, or emissions from fossil fuels that can irritate the eyes and breathing passageways in the body.

Even though obesity can adversely affect the body in a variety of health outcomes, there are ways to cope and minimize the exposure of EDC. Research shows that a person can minimize EDC exposure by consuming organic fruits, vegetables, and grain products insofar as possible. This includes an increasing number of fungicides routinely applied to fruits and vegetables that are being identified as obesogens and metabolic disruptors in the body.

When a person has an endocrine disorder, it might be due to the food they are consuming. Phytoestrogens are plant-derived compounds that are in a wide variety of food, mostly in soy. They are presented in numerous dietary supplements and widely marketed as a natural alternative to estrogen replacement therapy.

There is a health impact on phytoestrogen, and the plant-derived compound can either mimic, modulate, or disrupt the actions of endogenous estrogen. Xenoestrogen�are synthetically derived chemical agents from certain drugs, pesticides, and industrial by-products that mimic endogenous hormones or can interfere with endocrine disruptors. These chemical compounds can cause an effect on several developmental anomalies to humans. It can also interfere with the production and metabolism of ovarian estrogen in females.

Endocrine disruptors can interfere with the body’s endocrine system causing a health risk to an individual. EDC (endocrine-disrupting chemicals) can target many different organs and systems of the body by various factors that the human body is being exposed to. One of the EDC factors is obesogen, and it can cause a person to gain weight and be obese. Another factor is the exposure of PAHs (polycyclic aromatic hydrocarbons) through environmental factors like smoke inhalation or consuming charcoal-broiled meats. There are ways to cope with EDC exposure, and one is eating organic foods, especially fresh fruits and vegetables. Another is products that target the endocrine system and helps support the liver, intestines, body metabolism, and estrogen metabolism to ensure not only a healthy endocrine system but also a healthy body to function correctly.

October is Chiropractic Health Month. To learn more about it, check out Governor Abbott’s proclamation on our website to get full details on this historic event.

The scope of our information is limited to chiropractic, musculoskeletal and nervous health issues as well as functional medicine articles, topics, and discussions. We use functional health protocols to treat injuries or chronic disorders of the musculoskeletal system. To further discuss the subject matter above, please feel free to ask Dr. Alex Jimenez or contact us at 915-850-0900 .

Cardoso, A M, et al. �Obesogens and Male Fertility.� Obesity Reviews : an Official Journal of the International Association for the Study of Obesity, U.S. National Library of Medicine, Jan. 2017, www.ncbi.nlm.nih.gov/pubmed/27776203.

Patisaul, Heather B, and Wendy Jefferson. �The Pros and Cons of Phytoestrogens.� Frontiers in Neuroendocrinology, U.S. National Library of Medicine, Oct. 2010, www.ncbi.nlm.nih.gov/pmc/articles/PMC3074428/.